Pilates offerings are by appointment only, available in the east end and west end of Toronto, Ontario

to find out more or book your private 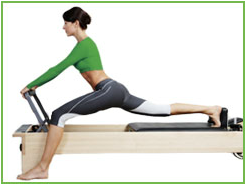 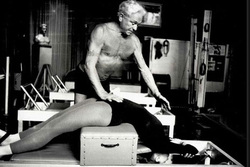 Joseph H. Pilates (1881-1967) developed the Pilates exercise system in the 1920s. With a background in yoga, Zen meditation and martial arts, Pilates devised a unique sequence of movements that worked the mind and muscle in harmony. German born, he refined this system while interned in England during the First World War. He worked in an infirmary and rigged springs on hospital beds to offer light resistance exercises to bedridden patients.

After the war, Pilates and his wife, Clara, moved to New York. He opened up a studio near the New York City Ballet, where he attracted dancers seeking long, lean muscles and a streamlined physique. His clientele included Martha Graham and George Balanchine among others. In 1945, Pilates published Return to Life Through Contrology, which described his exercise philosophy.

In the 1990s, the mind-body fitness movement became popular with Baby Boomers who wanted alternative wellness techniques. Hollywood celebrities embraced Pilates and studios began appearing at neighborhood gyms. Since then, Pilates has continued to grow, proving that it is much more than just a passing fad.

"I'm fifty years ahead of my time" Joe once claimed. He was right. No longer a workout of the elite only, Pilates has entered the fitness mainstream.
​
Today, over 10 million North Americans practice Pilates, and the numbers continue to grow.
book with me